I may have found the solution to all those Ethiopian kids throwing rocks at passing cyclists.  See this story.  http://dvice.com/archives/2012/10/ethiopian-kids.php

As the story says:

“What happens if you give a thousand … tablet PCs to Ethiopian kids who have never even seen a printed word? Within five months, they’ll start teaching themselves English while circumventing the security on your OS to customize settings and activate disabled hardware. Whoa.”

So we just need to drop tablets in every village we pass through a few weeks before we get there and all the kids will be so busy geeking it they won’t even see us.

I have just started a new facebook group for the 2013 Tour d’Afrique.

Please join the group and ask your friends to join! 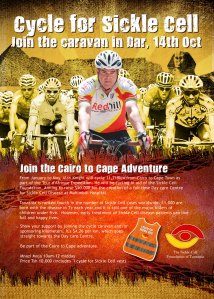 A whole team of people has been working very hard in the background to get our sickle cell foundation fundraising campaign off the ground. Anton, Annelie and Derek at DJPA Partnership, a local communications firm; Mejah and his crew at UWABA, a cycling advocacy group here in Tanzania; and Sarah and Julie at the Sickle Cell Foundation. We have two upcoming events: a reception for corporates on October 4th (the Sea Cliff hotel has kindly offered to host); and a ‘Cycle Caravan’ around Dar on October 21st – see the poster (it says Oct 14 by mistake – this will be changed). We are looking forward to both events and hoping to raise lots of dosh for the Sickle Cell Foundation.

Technology in the quiet zone

One of the things I need to figure out is what technology I will use to communicate while I am cycling across Africa. Don’t get me wrong. It is not as if I want to stay as wired as we have all become in the last couple of decades. I don’t. It is more a question of ‘what do I need to stay minimally connected’ so that when I need to communicate it is there and when I don’t it leaves me alone.

When I was 20, in the early 70s, I did a year at the University of Nice in the South of France. During that year, I had absolutely no expectation that I would talk to anybody I couldn’t see or touch. We wrote letters. Put them in envelopes. Put stamps on them. And put them in letter boxes. Odd. Phones were expensive, not something 8 year olds get for their birthday. In fact, the only time I phoned home during that year was when we were cycling in the hills behind Nice and found a phone box with a broken phone it. I think the coin mechanism was jammed. You could phone anywhere in the world for nothing. (You may well ask what we were doing testing phones in the hills behind Nice. Nothing drug induced or paranormal I’m afraid. We had simply received a tip that it existed so had rushed off to see if it still worked – or was still broken.) Unfortunately when we tried it again the next week it had been fixed.

But traveling through Africa is a different challenge. There is that tension between voluntarily entering the ‘quiet zone’ and the need to stay connected. Some times the quiet zone will be enforced, but not always. So I need to figure out what will be best. Do I take laptop? Or just a smart phone? Or neither? Do I just take a ‘bog standard, doesn’t matter if I lose it’ phone. Do I buy local SIM cards or get a ‘covers all’ data and roaming package? Or do I just take a pencil and a notebook and use Internet cafes when and where I find them? Any type of phone, laptop or netbook will need to be charged. That means more technology and more time babysitting it.

Back in the 70s I would not be asking myself any of these questions. At the end of the 70s I lived in Northern Nigeria for two years. I didn’t talk to my parents – or anybody else outside of Nigeria – for those two years. I didn’t feel deprived or lost. I was in the quiet zone and that was fine.

I thought this was just about riding a bike.